some text parts are still in progress – coming soon

In January 2014, work began on the project ‘POST41: Viennese Jewesses and Jews in Litzmannstadt Ghetto’ (working title). A team of Austrian and Polish researchers are devoting an exhibition in Vienna and Łódź and a memorial book to the 5,000 Jewesses and Jews, deported as part of the so-called ‘transports of western Jews’ in October and November 1941 from Aspangbahnhof in Vienna to Radegast railway station in Łódź, and from there to Litzmannstadt ghetto.

‘Post41’ is a documentation of testimonies from Litzmannstadt ghetto. The exhibition and memorial book make available to the public for the first time postcards from Viennese deportees, held back by the ghetto administration in 1941.

About 3,400 postcards written during the winter of 1941-42 to relatives, friends and neighbours in Vienna and other European cities are to be found in the State Archive in Łódź. They offer a glimpse of the desperate circumstances of deportees in the ghetto, their anxiety about relatives and friends in Vienna, and the network of social contacts that existed amongst Viennese inmates. Postcards and diaries, extracts from the ghetto chronicle as well as photos and film extracts form set pieces in the reconstruction of a story that essentially cannot be told. ‘It was an atmosphere that cannot be described. It cannot be filmed or narrated.’ (Grete Stern, born 1920. From an interview in January 2013). 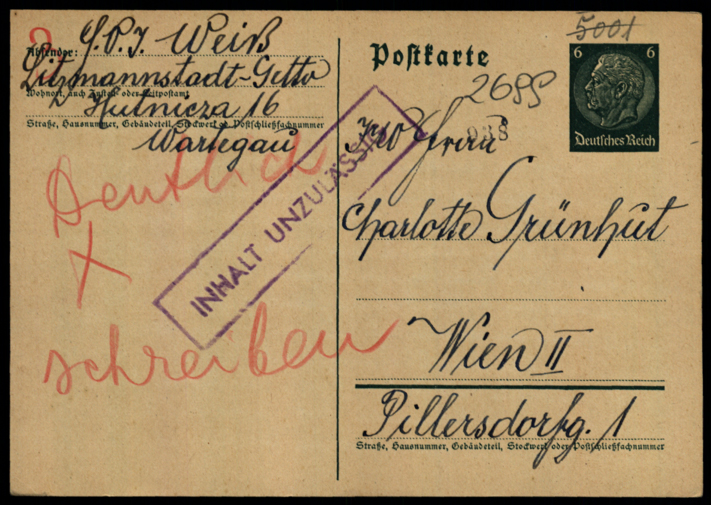 In October 1941, thousands of Jewesses and Jews in Vienna were summoned to ‘present themselves’ with 50 kilograms of baggage per person at local schools in readiness for deportation.

Five transports, each carrying 1,000 people, travelled from Aspangbahnhof to Łódź, Litzmannstadt ghetto between 15 October and 2 November 1941.

Many of the Viennese women and men deported in 1941 died of starvation and disease within the first few months. More than 3,000 were murdered in May 1942 in nearby Kulmhof (Chelmno) extermination camp.

In August 1944 the ghetto was liquidated by the Nazis. Survivors still living in the ghetto were taken to Auschwitz concentration and extermination camp. Of the thousands of people deported from Vienna to Litzmannstadt, only 34 lived to see liberation.

A total of 20,000 people were deported in autumn 1941 from western territories of the German Reich to Litzmannstadt ghetto. Similar projects documenting the transports from Berlin, Düsseldorf, Trier and Cologne have already been completed by German researchers. 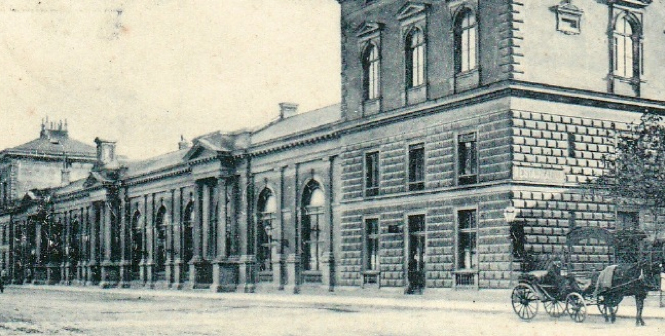 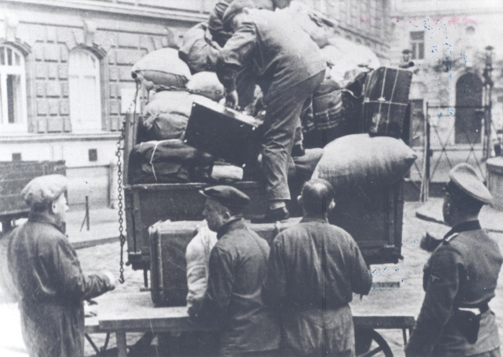 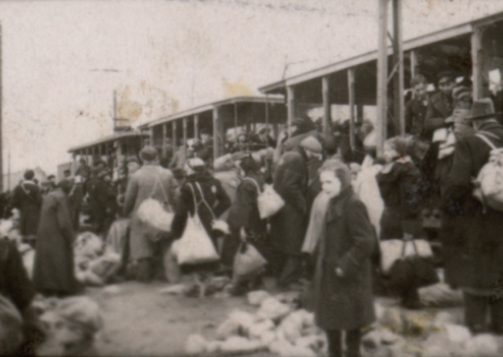 Arrival of a transport from Vienna in Litzmannstadt ghetto. 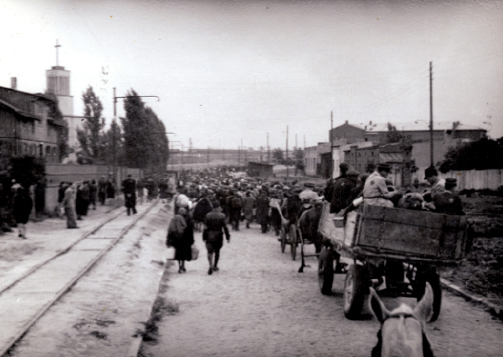 Deportation to Kulmhof – on the way to Radegast railway station, 1942
Photo: State Archive in Łódź 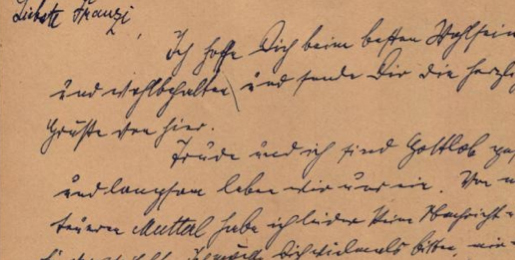 One of around 3,400 postcards from Viennese deportees, which were held back in winter 1941/42 by order of the ghetto administration.

The project was divided into three phases. The first phase involved the systemic analysis of 3,400 postcards from the State Archive in Łódź. It was possible to identify the addressors by means of the ‘lists of transports’ for Vienna, held by the Documentation Centre of Austrian Resistance, and to crosscheck spellings of names and correct them, where necessary. The lists of addressees, which had been compiled by staff of the State Archive in Łódź, were checked for errors and incomplete addresses. The handwritten texts of the postcards, some of which were written in Kurrent, were transcribed, legibility permitting. This body of texts is harrowing testimony to the living conditions of deportees in Litzmannstadt ghetto.

It sheds light too on the network of social contacts that existed within the group of inmates from Vienna and between them and Polish Jewesses and Jews. Fated never to reach their destination, the postcards tell of the desperate, often fruitless search for work in the ghetto, of mutual support between inmates, and of mounting anxiety about family members left behind in Vienna. They frequently contain urgent pleas for much-needed financial support from outside.

Together with documents from archives in Austria, Poland, Israel, the USA and Canada, and remarkably extensive photographic material derived from inside the ghetto, these texts form the bases of the second and third phases of the project: a temporary exhibition and a memorial book. 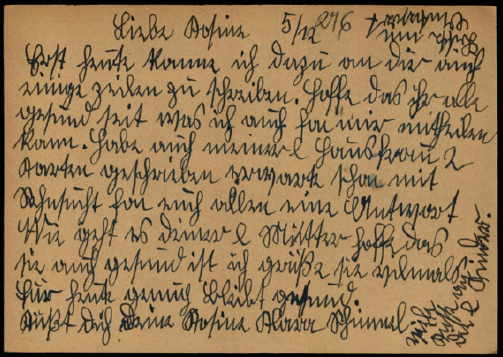 The exhibition ‘POST41. Reports from Litzmannstadt Ghetto’ was opened on 30 September 2015 in the Jewish Museum Vienna and can be viewed until 6 March 2016. It will be moved subsequently to Radegast Memorial in Łódź. Further venues are planned in Poland and Austria. 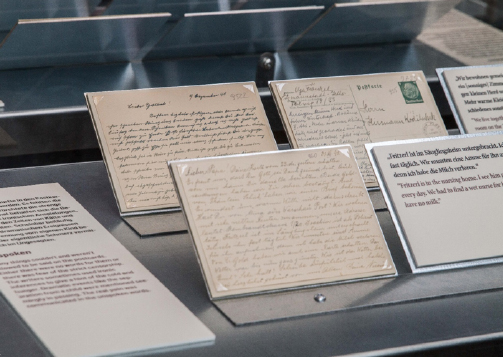 The title of the exhibition relates to the extraordinary number of personal testimonies and documentary reports that capture life and death in the ghetto from various perspectives. The aesthetic colour photographs of Walter Genewein, for instance, mirror the lies and distortions being projected from outside.

The documentation initiated by the Jewish ghetto administration was designed to preserve for posterity a record of the ‘workings’ of the ghetto, and included photographs by Henryk Ross and Mendel Grossman, as well as the Ghetto Chronicle from the archive of the Chief Elder of the Jews. Two intellectuals from Vienna, Alice Chana de Buton and Dr Oskar Rosenfeld, were among the writers who contributed to this chronicle. 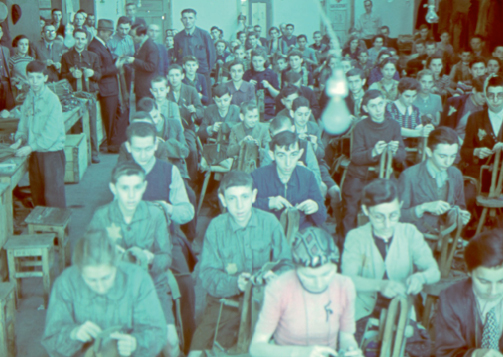 Saddlers’ workshop in the ghetto 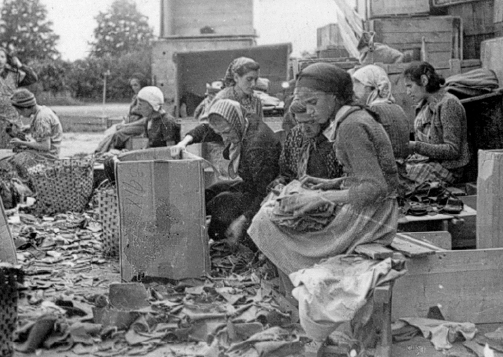 Women working in the bootleg division 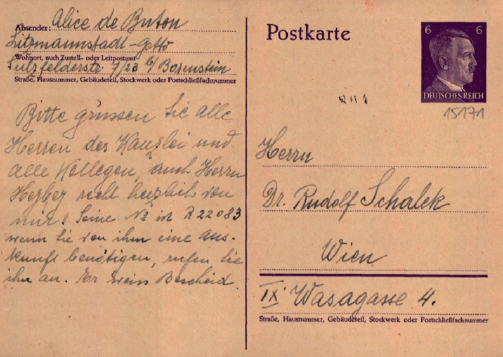 The postcards betray the grief and suffering of those who wrote them, despite the restrictions on certain content imposed by the ghetto administration. And the diaries salvaged from the ghetto reveal the personal, uncensored impressions of inmates in all their immediacy.

Aspangbahnhof 1941. The story of a female friendship by Angelika Brechelmacher and Martina Aichhorn, a video documentary of contemporary witness reports by two Viennese women who were amongst the survivors is embedded in the exhibition. Excerpts from biographical interviews with Hella Fixel and Grete Stern, two Viennese women, then about 20 years old, who managed to survive the ghetto, Auschwitz and forced labour, form another thread in the story. The two women recall what daily life was like in the ghetto and describe their survival strategies, the coincidences that saved their lives, and the help they received from Polish Jewish prisoners.

In keeping with the dictum, ‘Lest we forget’, the exhibition is also aimed at young people and school classes.

The third phase of the project involved the publication of a memorial book under the same title, ‘POST41. Reports from Litzmannstadt Ghetto’. The book appeared in two versions, a German-English version and Polish-English version, and was published by Mandelbaum Verlag to coincide with the opening of the exhibition on 30 September 2015. The book’s contributors include the historian Bertrand Perz (the history of the ghetto), Florian Freund (the ‘Roma camp’), Piotr Zawilski, Director of the State Archive in Łódź (archive material), Hanno Loewy, Director of the Jewish Museum in Hohenems (diaries and the ghetto chronicle), Regina Wonisch (photographic documentation of the ghetto), Hannelore Steinert (postal system in the ghetto), Angelika Brechelmacher (Viennese postcards). The second part of the book presents snapshots of the lives of individual deportees from Vienna, reconstructed from the material, primarily the postcards. The book contains 180 colour photographs. 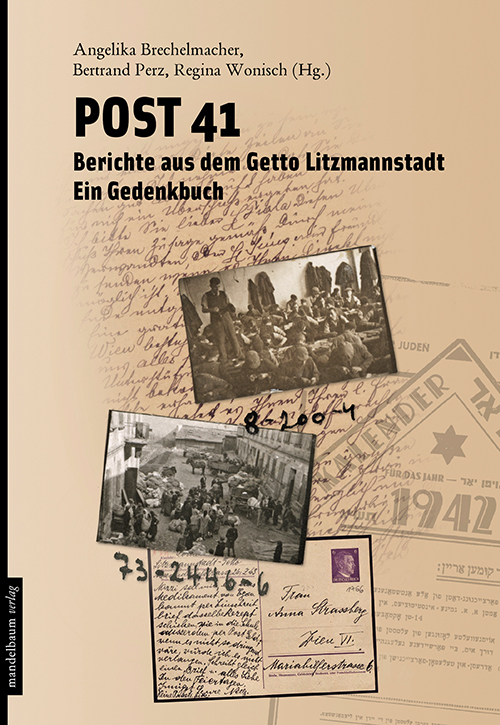 The Project ‘in Brief’  (coming soon) 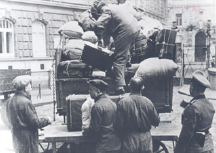 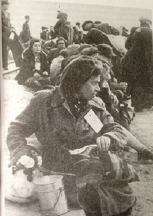 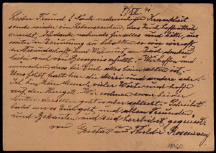 INVITATION TO THE EXHIBITION (*.pdf)

This project has been funded with support from the European Commission.

This publication [communication] reflects the views only of the author, and the Commission cannot be held responsible for any use which may be made of the information contained therein.